“Your body thinks it’s a matter of life or death.”

“Your body thinks it’s a matter of life or death.”

Balancing acts over canyons that run several hundred meters deep make even spectators catch their breath. Breathing also plays an essential role in both the hobby of highliners Thomas Spöttl and Peter Auer and the Austrian pavilion at this year’s EXPO in Milan. The two Austrians and some friends founded the union “Vienna Slackliners”, originally to facilitate joint purchases of equipment. Today they see themselves as an interest group for slackliners in Vienna; there’s a monthly highlining workshop for beginners. In our interview they talk about fear, risks and dealing with basic human instincts. 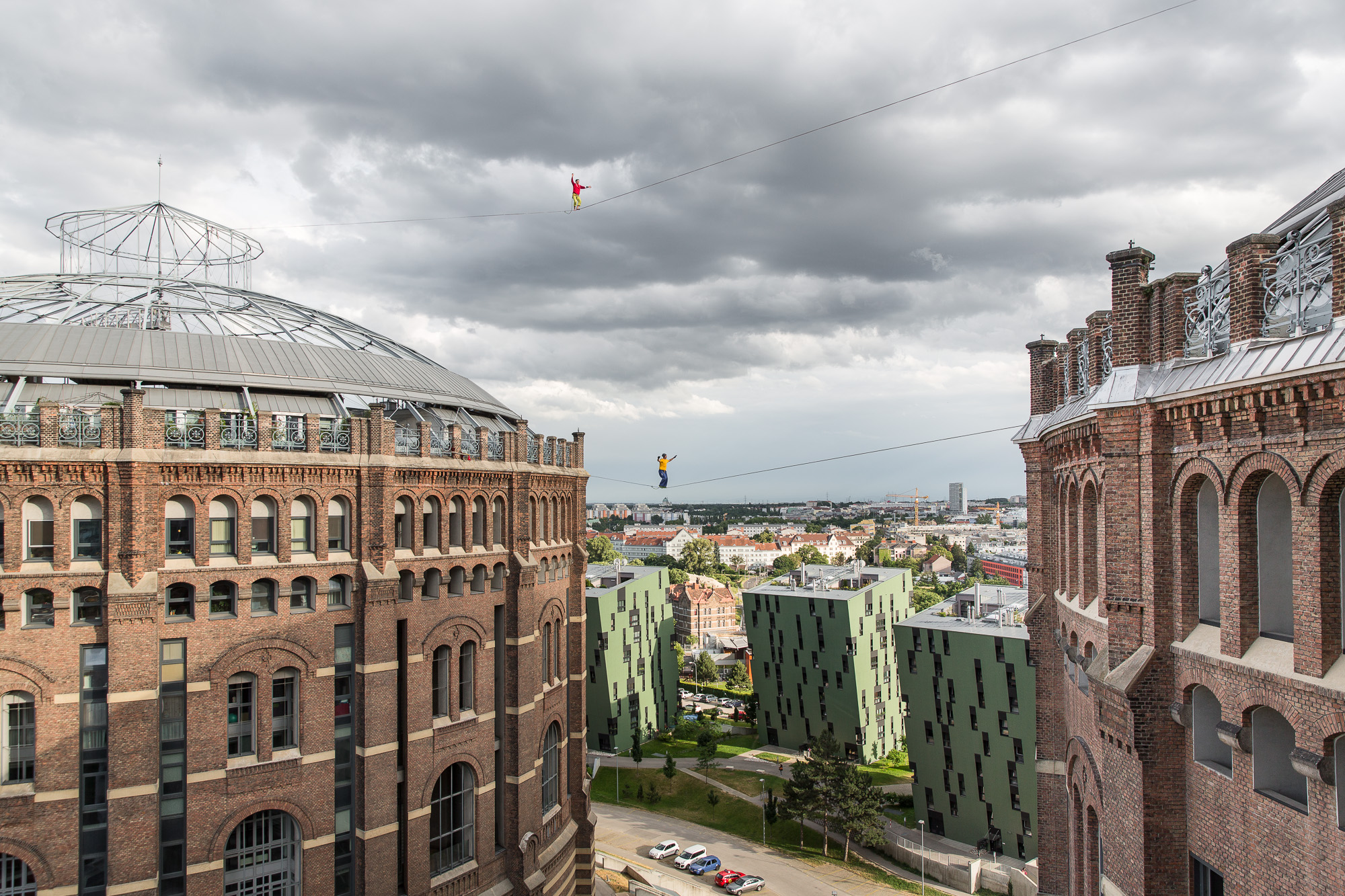 You could tension a slackline between two trees in the park, but you guys tension yours over canyons. What went through your mind when you were up on such a line for the first time?

Thomas: In fact, my first highline was between two trees – ten metres above ground. It worked quite well actually.
Peter: It took me a long time to get used to heights. Every fibre of my body seemed to say: Don’t do this! Shitty idea!

Is it a shitty idea, or, in other words, is it dangerous?

Peter: It’s almost impossible that something bad happens to you on the highline. You are secured by a leash and there’s nothing but air around you. From this perspective, it’s actually a super safe environment.

Thomas: I know that I’m not going to die up there. After all, I’m secured. Still it is so extremely frightening every time again – but why? Am I afraid of the hard work it takes? Of the new challenge? Or of failing? 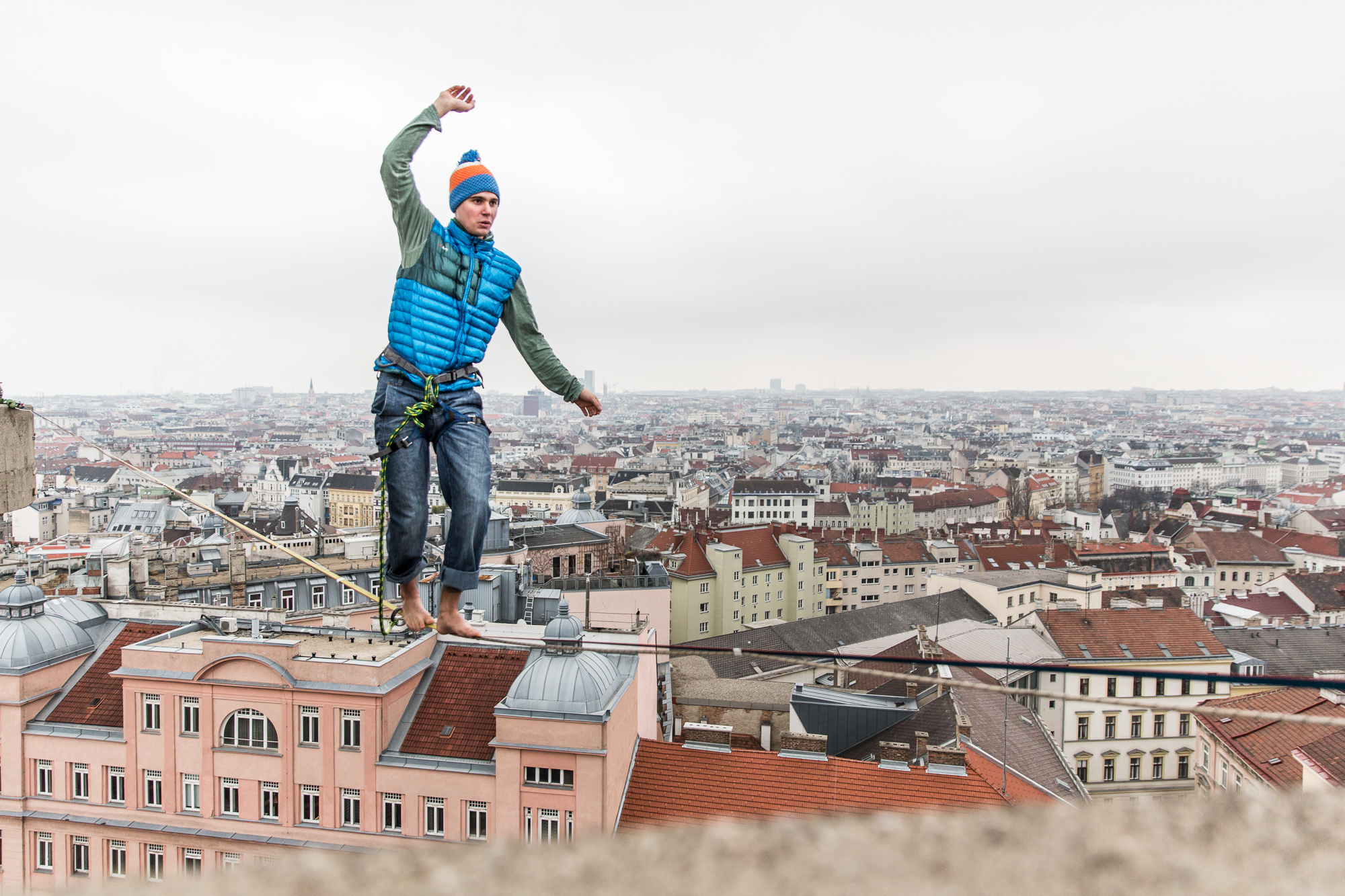 Extremely frightened doesn’t sound like much fun to me. What do you find so fascinating about highlining?

Thomas: When you’re standing on the line it doesn’t matter whether your girlfriend is standing ten metres behind you on the edge. You are alone nevertheless. It’s this feeling of fear and loneliness that is so enticing, this getting in touch with myself and my basic instincts.

Peter: In our daily lives there’s always something you can hold on to. It was on the line when, probably for the very first time in my life, there was nothing to hold on to. And height adds even another dimension to this experience.

Talking about daily lives: What does someone who walks across canyons as a hobby do professionally?

Peter: I work in the production department of a pharmaceutical company.
Thomas: Accountant.

There are no parallels to highlining, I guess…

Thomas: Well, it’s important to find your balance also in your professional life. There has to be a balance between stress, downtime and interesting challenges. Moreover, highlining taught me to stay calm while maintaining some kind of basic tension.

Peter: I also learned to be much more relaxed about many things. Many of our daily routines and tasks are much easier to complete when you stay calm and relaxed. And of course it’s also a nice escape. You leave all your everyday stress back home. The stress on the highline is a positive form of stress. Even when you’re back in the office on Monday feeling all exhausted and covered in scratches, it’s a very positive feeling. 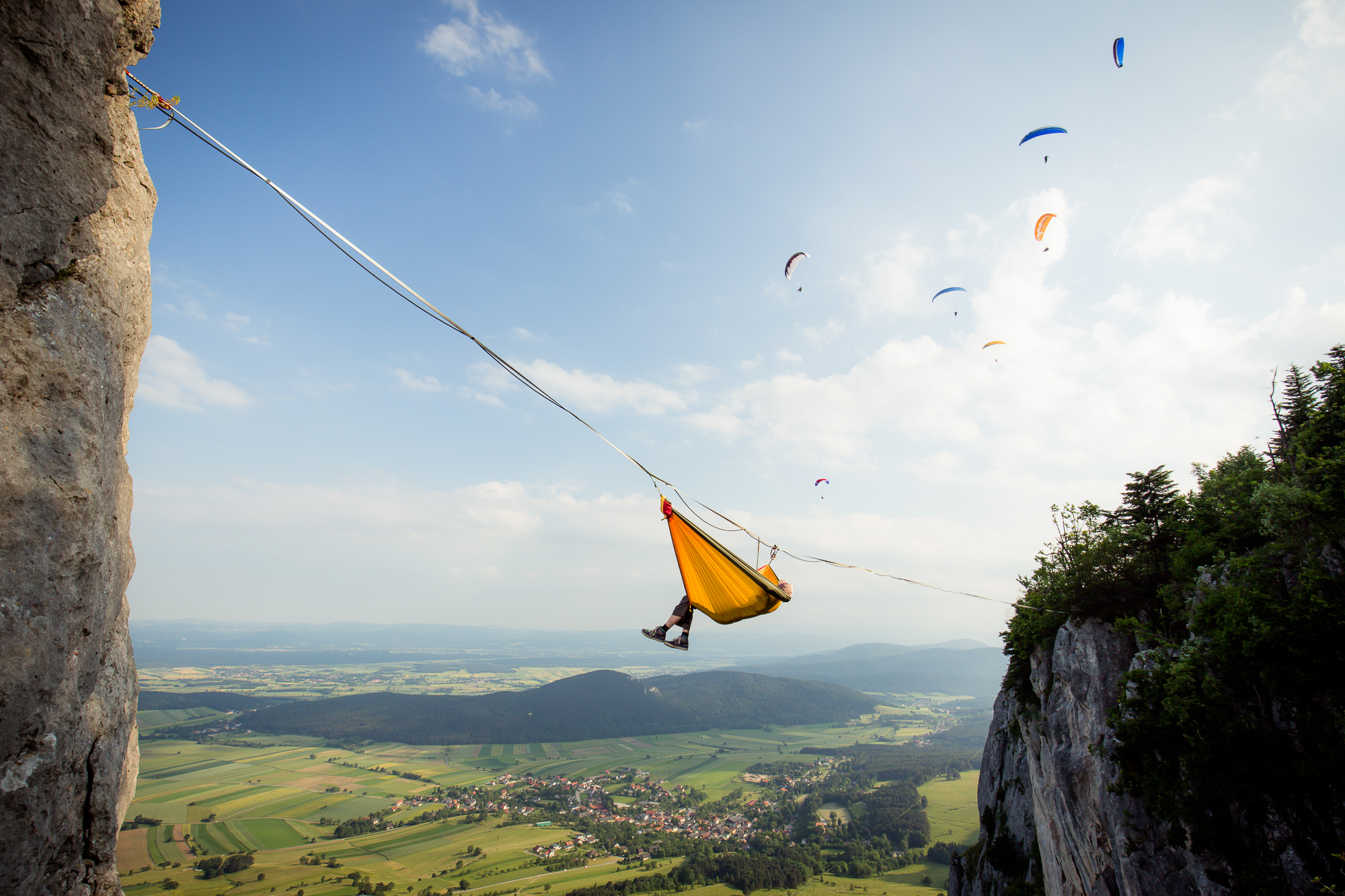 What was your highest – or longest – line?

Thomas: About 600 metres height of fall. And with regard to length: I can walk a 60 metre line safely.

Peter: We often don’t even know the exact height because normally we don’t measure height. It doesn’t matter anyway: It’s either damn high or not high enough. My longest line, however, was about 110 metres, I guess.

How do you prepare for such a line?

Thomas: I think Peter is your guy here. He always hides somewhere before he goes on the line and then he walks it as if there was nothing special about it…

Peter (laughs): I try to deal with the situation beforehand. What do I see? Where do I look? What kind of music do I listen to? Music can be of great help because it distracts you from the actual issue at hand. It’s better not to think too much and rather listen to what you’re feeling. And then you get into the flow, you’re entering some kind of tunnel where you’re no longer thinking, just doing.

Thomas: … and then you think, I made it, I’m in the tunnel – and just then it’s gone again!

Peter: Concentration is a tough game. You can easily try it: Think about the many things that go through your mind when you’re trying to think of only one particular thing for a minute.

Thomas: Breathing also plays an important role. I try to enrich my brain with oxygen beforehand. Nothing works if there’s no oxygen in your brain. 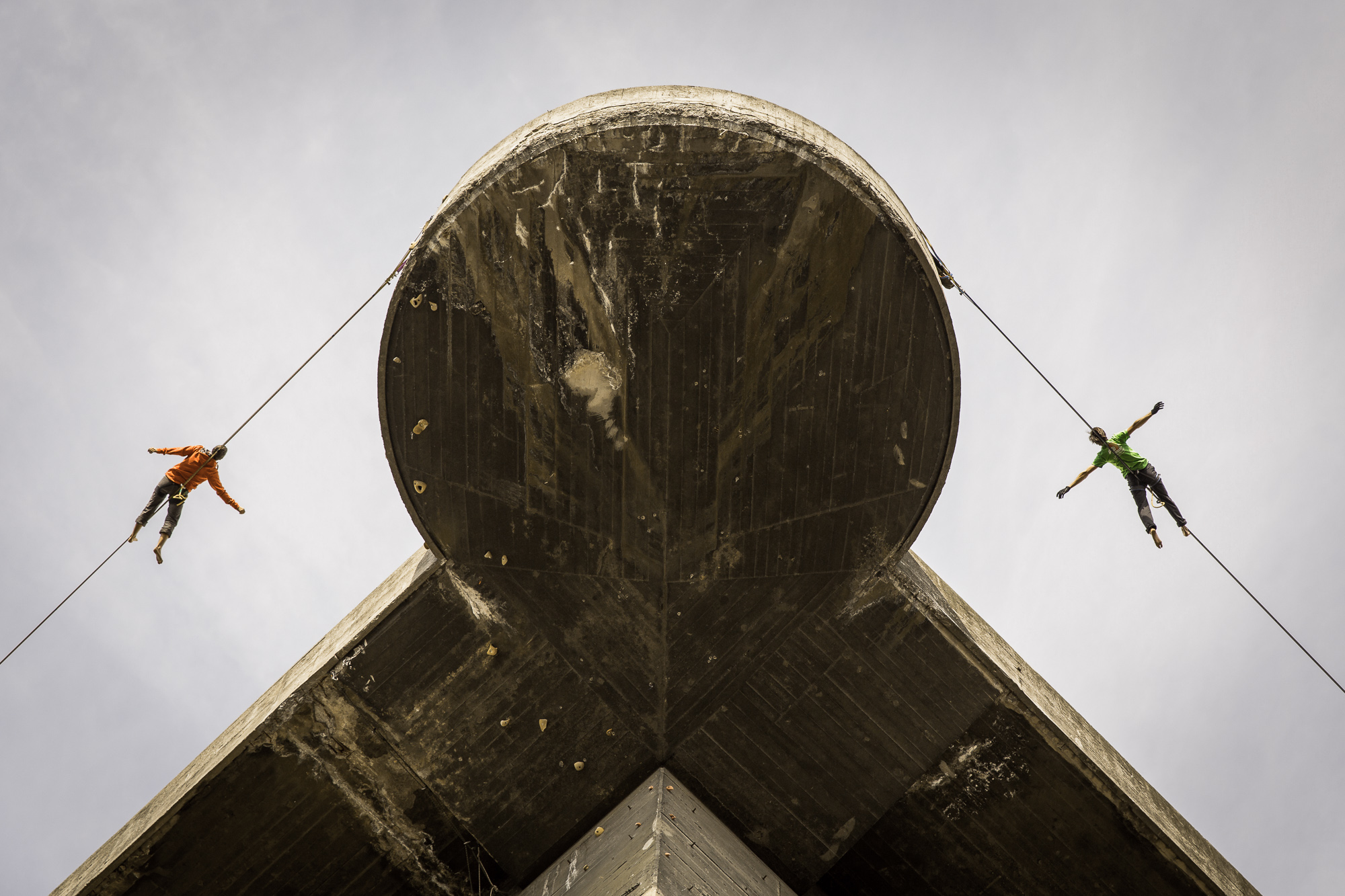 Nice cue. The motto of the Austrian pavilion at the EXPO in Milan is BREATHE AUSTRIA. What role does breathing play in highlining?

Thomas: I had big problems with it. At first I breathed too little and got side stitches, then I breathed too much and my heart started racing. And then, finally, I found out I had to breathe in through the nose and breathe out through my mouth. That’s what works best for me.

Peter: Especially when I start to falter I realize it’s because I didn’t breathe for too long. Then I play “locomotive”: I breathe out very consciously and very loud. But that’s only if I am almost at my limit. When the line requires only 98 per cent of my capability I don’t need to concentrate on my breathing as much.

Thomas: In the beginning I often made the mistake of playing locomotive all the time, adding up pressure – and then the moment of getting there, of reaching the other end is not so nice. Sometimes I even felt nauseous because I went above the right heart rate.

Let’s say someone can easily master a 20 metre line in the park. Will they be able to do the same on a highline?

Peter: If a person has never spent time somewhere up high, say in a rock face or the like, it will probably be tricky. Your brain knows that nothing can happen but your body just doesn’t.

Thomas: It’s a pretty old instinct to avoid situations where you can fall down somewhere. And also, when you’re on a line close to the ground it is much easier to find orientation. Am I straight? Or lopsided? Up high, there is no orientation of that kind. All you can rely on is what you are feeling.

Peter: Many people instinctively do the right thing, but in a very exaggerated way. Although small movements would be enough, they make huge ones. 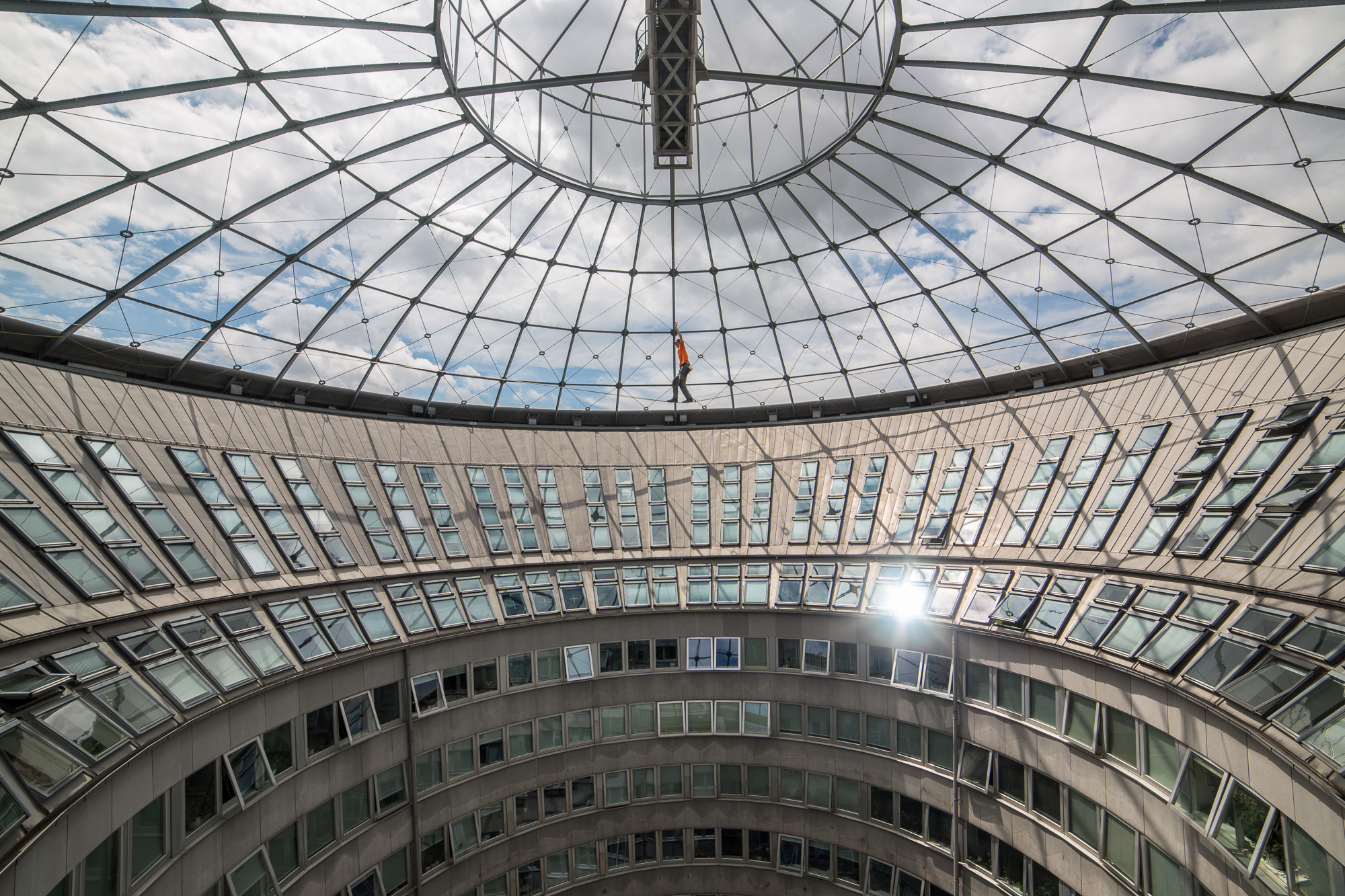 There are highliners who go all unsecured. Is that stupid?

Peter: We know some of the people who do that. If they say they are absolutely sure they will catch that thing (NB: the safety line), I believe them. Of course there’s always some risk, but I think the bigger problem are those who only take risks to impress the media or their friends on Facebook: Look at us, we’re the daredevils!

Thomas: In general I respect it when people do it for the right reasons: for themselves, without spectators or cameras. When you’re going a free solo, you literally have your life in your own hands. That’s one crazy feeling of being in control. Emerging out of something like that alive is an unbelievable thrill. Even when you’re secured on the line your body thinks it’s a matter of life and death. It’s the same reason why people ride rollercoasters, it’s the adrenaline that rushes in when your body thinks it’s all about survival.

(Annotation by Thomas: “Please add that I’m not interested in doing a free solo, otherwise my mum will think I do stuff like that too!”)