The organic ambassador from 2nd district

The organic ambassador from 2nd district

“Everything here is made to measure, with moderation and purpose.“ That’s a rough translation of the slogan of Andrea Lunzer’s grocery store/deli in Vienna’s second district. Not far from the city’s famous park, the Prater, she offers assorted organic foods – without packaging only. Although this concept is dating way back, it seems radical today and has the potential to revolutionise food retailing.

The motto of this year’s Expo in Milan “Feeding the World. Energy for Life.” addresses three things that are essential to Andrea Lunzer’s store concept: Feeding everyone sufficiently and healthily without exploiting the planet, whereas “sufficient” in this store is supposed to hit the spot right between “not too much” and “just enough.” Just enough so nothing has to be thrown away. Every year, 1.3 billion tons of food are being discarded; a fact that can only make Andrea Lunzer shake her head. Because she knows it doesn’t have to be that way. 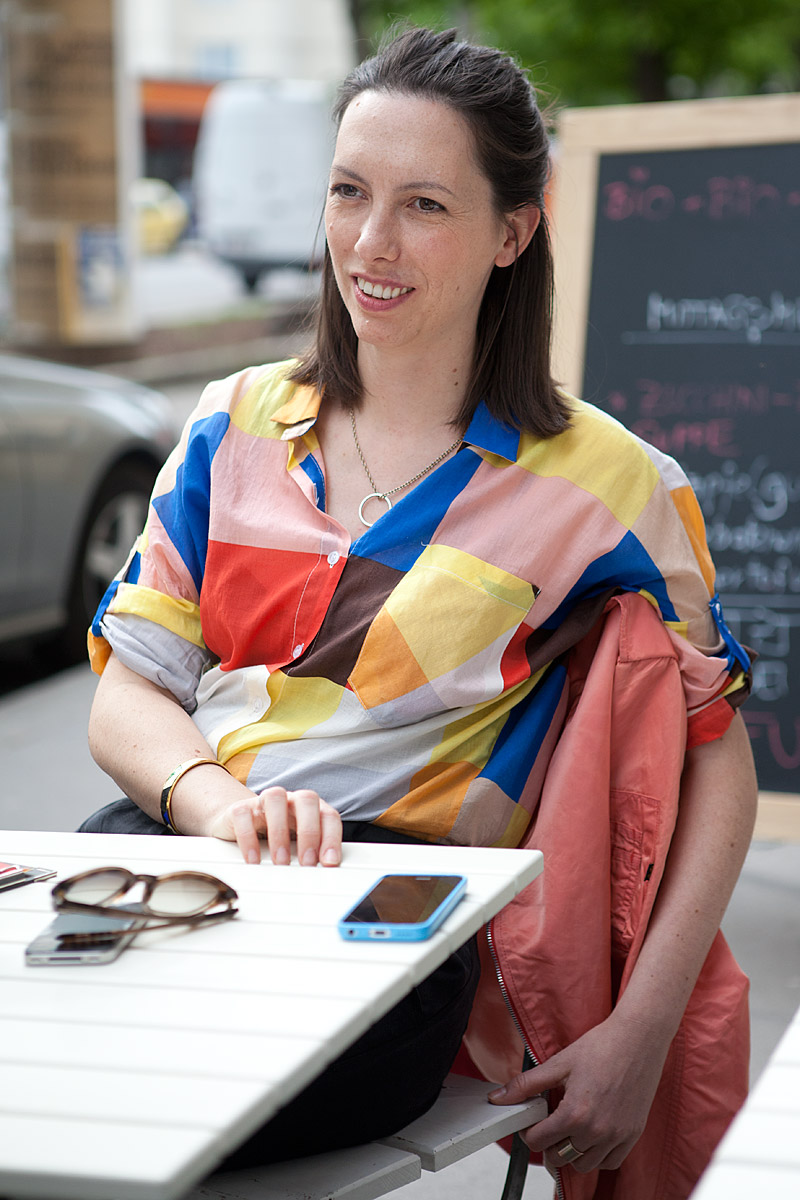 Andrea, born in the Austrian state of Burgenland, started her store a little more than a year ago. It’s thriving and praised by many; she’s even thinking of expanding her business. Her no-packaging, just-as-much-as-I-really-need concept hit a nerve right where it hurts many of us: We know that feeling of guilt when we realise how much waste we produce, the pain of having to throw away food. But she also hit two other nerves that couldn’t be more zeitgeisty: The resistance against commercial companies dictating us how much of what we have to buy, and the ever increasing demand in organic food. The store in her neighbourhood, the Leopoldstadt, therefore attracts a heterogeneous crowd and not only LOHAS (“Lifestyle of Health and Sustainability”) with above-average incomes. Andrea Lunzer is far from seeing her store as elitist. Although most of her customers are 25-40-year-old foodies looking for organic, sustainably produced food, there are also many elderly people who come to her store with their jars and containers. It’s this older generation who “is thoroughly hurt by food waste, not only financially because they have small pensions but also because it conjures up bad memories,” says Andrea Lunzer. These people appreciate the made-to-measure approach, while the younger ones regard the store as something unique or specific to their “Grätzel” (neighbourhood), a place where you can always exchange a word or two in an informal setting.

Andrea Lunzer brought the “Greißlerei” (Viennese for small grocery store) from the olden days into our times. Her store is chic, hip and, most of all, well thought out. “The cash desk is much more than a cash desk. There is always someone there, a face to welcome customers and help if questions arise. And people really do ask more, also because there are no wrappings with information written on them.” It’s a simple concept: Bring your own container or take a paper bag and fill it with what you need. The packaging weight will then be subtracted. Glass containers are sold in the store or can soon be borrowed. The products are naked except for those who can’t be for hygienic reasons, e.g. milk or juices. At the beginning, Andrea Lunzer sold only locally sourced products. In the meantime, she has expanded her range, and that’s for a good reason.” The same goes for spices because around here “pepper is almost as good as it gets.” And, after all, customers should be able to get everything they need for a good meal in the store.

„Walter, Heidrun already bought some wine!“
There’s a lot of talking, explaining, discussing in the store. Lunzer’s Maß-Greißlerei is a place where people meet and have coffee or a little something to eat in the deli section of the store. The most fun part of her job, says Lunzer, is to engage directly with customers. Maybe that’s also down to some sweet childhood memories? “When I was a kid, I went to our Greißler for some milk with our own milk can. Today, it’s also a conscious decision against supermarkets where everything is so impersonal. Among my customers today are also people I know, who live in the same house. ‘Walter,’ they go, ‘no need to buy wine, Heidrun has already bought some.’ People really enjoy this personal touch.” Part of the customer service is giving advice or even raising awareness for the complexity of food and eating today. “Many people ask us about chia seeds or goji berries. But there are also Austrian equivalents: The European cornel from our Wachau region contains just as much vitamin C as goji berries and you can even buy fresh ones; hemp seeds are just as nutritious as chia seeds. We really don’t want to jump on every bandwagon because living sustainably also means to question things: Do I really need this? What’s really in it? Can I maybe source this locally?” 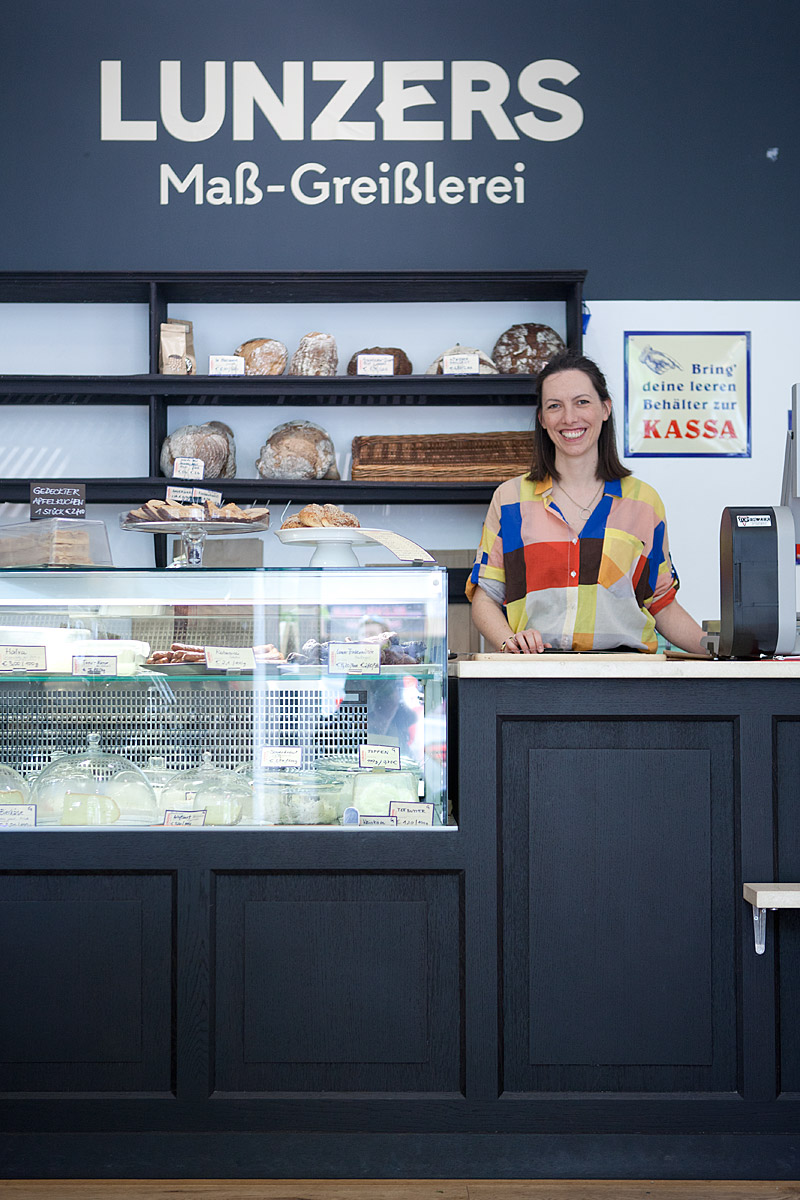 “Supermarkets could do this too”

Before opening the Maß-Greißlerei, Andrea Lunzer had worked on packaging for a big Austrian organic brand for several years. An increasing number of customers started to ask for more sustainable solutions (“The products are great, but why do they come in shrink wrap?”), and this was probably how the idea started to form in Andrea Lunzer’s head, an idea that finally resulted in the chic, trendy store that is now making Vienna’s second district a better and more beautiful place. This idea, combined with the fact that it drove her “crazy to be stuck at an office desk”, led her on a road that no supermarket chain would have dared to take. She did this with a lot of consideration, inspired by a similar store in East London and supported by a service designer who approached the project with “design thinking”, a method that analyses and refines a concept according to the needs and motivations of human beings. Still, at this stage Andrea Lunzer felt more like a child playing corner shop in her room than the proud storeowner she is today. But her plan worked out, it resonated with a lot of people. And, moreover, in an almost radical yet subtle way it questions a whole industry whose reputation is already tarnished. “After running this store for 14 months I can see that supermarkets could do this as well. Many products are wrapped for the sole purpose of branding.” Lunzer’s place may only be a cool little store in the heart of Vienna. But the concept behind it makes it really big, something that could change the food industry to the better. Let’s hope this will work out as well. 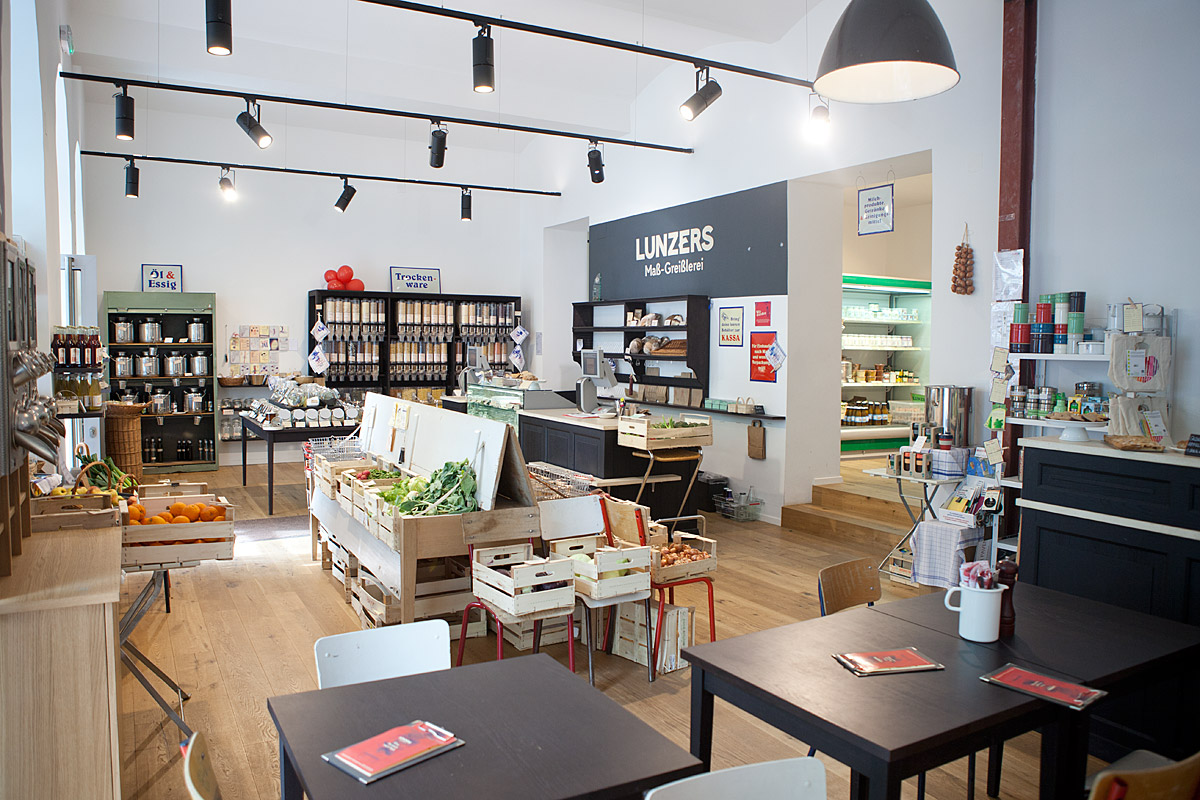