The glass manufacturer as a weightlifter

The glass manufacturer as a weightlifter

Maximilian Riedel provides the right tools for wine lovers worldwide. While guiding us through the Austrian factory of his internationally renowned family business in Kufstein, Tyrol, the 37-year-old tells us how he makes wine breathe and what inspires him in his work.

When Maximilian Riedel talks about his job, something seems to shine through every single sentence he says: Pleasure is the fruit of hard labour. As if to illustrate his words on this beautiful spring day, he wears a tie showing numerous weightlifters on yellow background, breathing heavily under their weights. The message is clear: Have a goal, work hard, breathe in, push the weight up, hold it there, give it your all, then finish the job, take a moment to enjoy your success and then breathe out and move on. 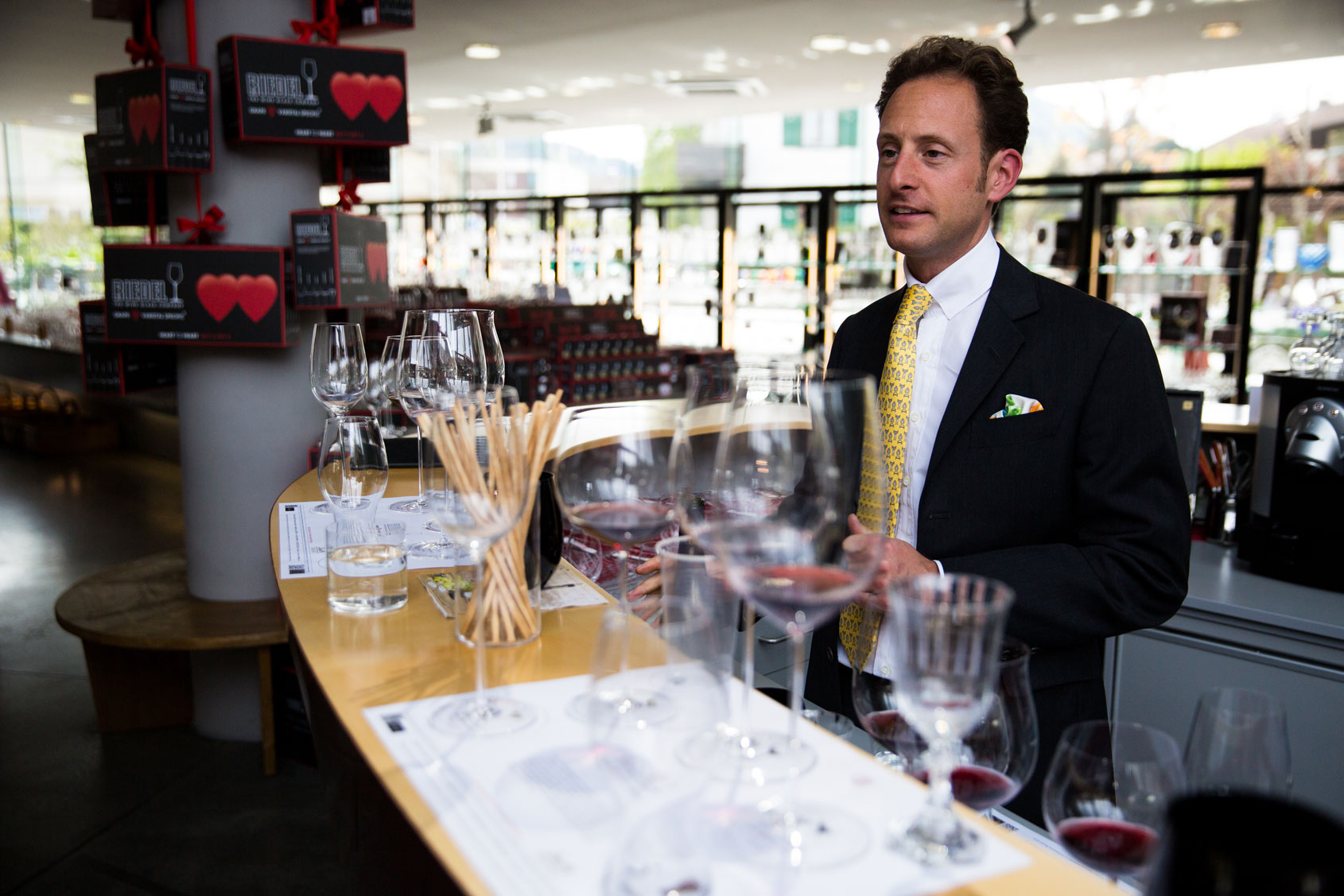 From Kufstein to New York and back

As the 11th-generation CEO of the world famous, family-run Riedel glassware manufactory, Riedel knows a thing or two about breathing. After all, his company is committed to one mission: to make wine breathe in the best possible way. Riedel has taken the long road to ensure this happens: At 23, he moved to the United States and became vice president of Riedel Crystal America; two years later he became CEO and turned North America into Riedel’s biggest export market. “Sure, New York didn’t have the best air for breathing, but I really inhaled the city’s cosmopolitan atmosphere and all the inspiration it offered for my work,” he recounts. And it was during his time in New York that Riedel came up with the idea for his award-winning “O” series of stemless wine glasses: A barkeeper he knew had told him that he sometimes had a hard time seeing his customers’ faces behind the glasses on the counter because he was rather short. And this was when the most successful new collection in the company’s history was born.

In 2013, Riedel, now 35, returned to Tyrol and became company President and CEO. Today, Riedel has subsidiaries in nine countries and 1,200 employees, and hundreds of restaurants all over the world serve their wines in the company’s exquisite glasses. Riedel also stocked Austria’s pavilion at the EXPO in Milan.

But how exactly do you make wine breathe? When Riedel talks about this topic, he likes to use the word tool. “Our glasses are supposed to be tools for helping wine develop its best possible taste,” Riedel says while pacing through the inner courtyard towards the glass factory. He quickly adjusts his tie, as if subconsciously referring to the weightlifters. Shape, colour and size of a glass are essential to the taste and smell of a wine, Riedel says and adds that perfecting and re-thinking these three elements over and over again poses a new challenge every day.

Besides the powerful symbol of the weightlifter there seems to be another inspiration for Riedel’s work: his father – and predecessor. “My father is a passionate marathon runner. Good breath management is essential in running – or you won’t be in for the long run,” explains Riedel. 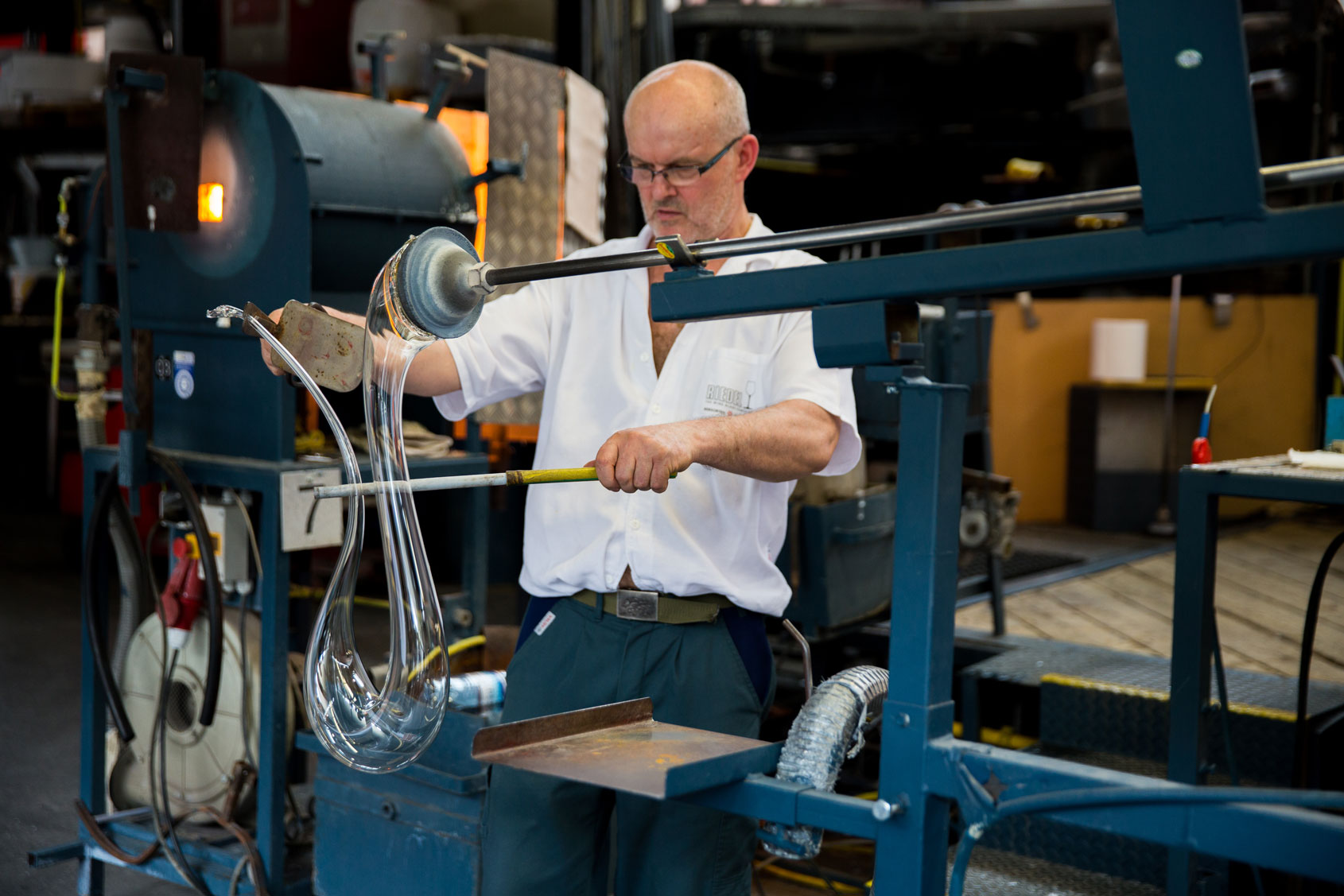 Breathing is also essential in the factory in Kufstein, founded in 1756. Maximilian Riedel shows us around: There’s glassblowing, turning, flipping, shaping, finishing. “He’s blowing a glass,” says Riedel, pointing at a stoically concentrated guy working on a glass. “He completely trusts in his feelings and his experience. His breath literally produces the glass.” Later, when the glass is put to work to let wine breathe, everything will come full circle.

When Riedel himself needs a fresh breath of air, some inspiration, he likes to travel; most of all, to Asia. And so it is no coincidence that the year of his birth is marked by the symbol of the snake in the Chinese calendar. “That’s why I have a thing for snake names for my designs,” he explains. In 2011, the decanters Mamba, Black Mamba and Green Mamba came out. Asked about how new products get named, he smiles mischievously and says, “It’s always a tough process.”

Riedel does not indulge in longer breaks though, there’s simply too much work to do, he says. “There’s no bravo when something turns out well.” He likes to go up to the mountains, but he doesn’t need a successful project or a special occasion to do that, the young entrepreneur states before he whizzes out of the factory and over to the sales and tasting room. There are more weights waiting to be lifted – figuratively speaking.

More weights waiting to be lifted

Here, in the degustation room, there’s extensive tasting and trying, all supervised by the boss himself: People compare glasses, feel them in their hands, they put their nose into the glass, close their eyes, and slowly let their tongue find its way and…enjoy. “Do you taste the difference?” asks Riedel the people in the room, almost answering the question himself. Everyone nods in agreement. And, then, after the weights are put back on the ground, there’s one final round of applause, so to speak: the presentation of the latest innovations made by Riedel – the Coca Cola glass and the Nespresso glass. The realization of the former, says Riedel, was a childhood dream coming true.

A little later, the bottles are emptied and Riedel makes his exit towards the inner courtyard. Take a quick breath and move on, more weights are waiting. And you can’t help but wonder which tie the sedulous glass manufacturer will put on tomorrow.