Stephanie Tscheppe-Eselböck and her husband Eduard Tscheppe grow wine in the Austrian province of Burgenland – biodynamic wines to be precise. Wines with personalities, personalities you can taste. We talked with the couple about sustainable viticulture, the future of their industry and the Burgenland as a place of power – and we learned that the first sentence above should actually not have been phrased like that.

The sun is up on the sky. On a blue, very blue sky. On the roof a round, soft stork’s nest. In it: two storks, one of them clattering with its long bill. They seem to really like it up there, on the roof of Gut Oggau in the Austrian province of Burgenland. “That’s no coincidence,” says Stephanie Tscheppe-Eselböck, vintner, owner of a “Heuriger” (traditional Austrian new-vine tavern), landlady, wife, mother to Magdalena, August and Matilda and not even 35 years old. “We put up the nest and two months later the stork arrived.” Obviously, there’s something special about this place. But what is it exactly?

In 2007, Stephanie Tscheppe-Eselböck and her husband Eduard Tscheppe, who comes from a Styrian family of vintners, started their vineyard based on biodynamic principles. Biodynamic means no chemicals, no synthetic pesticides or fertilizers and many other restrictions that aim at one thing: to understand a vineyard as a living organism of plants, animals and insects, capable of maintaining itself. Human interference thus has to be kept to a minimum. 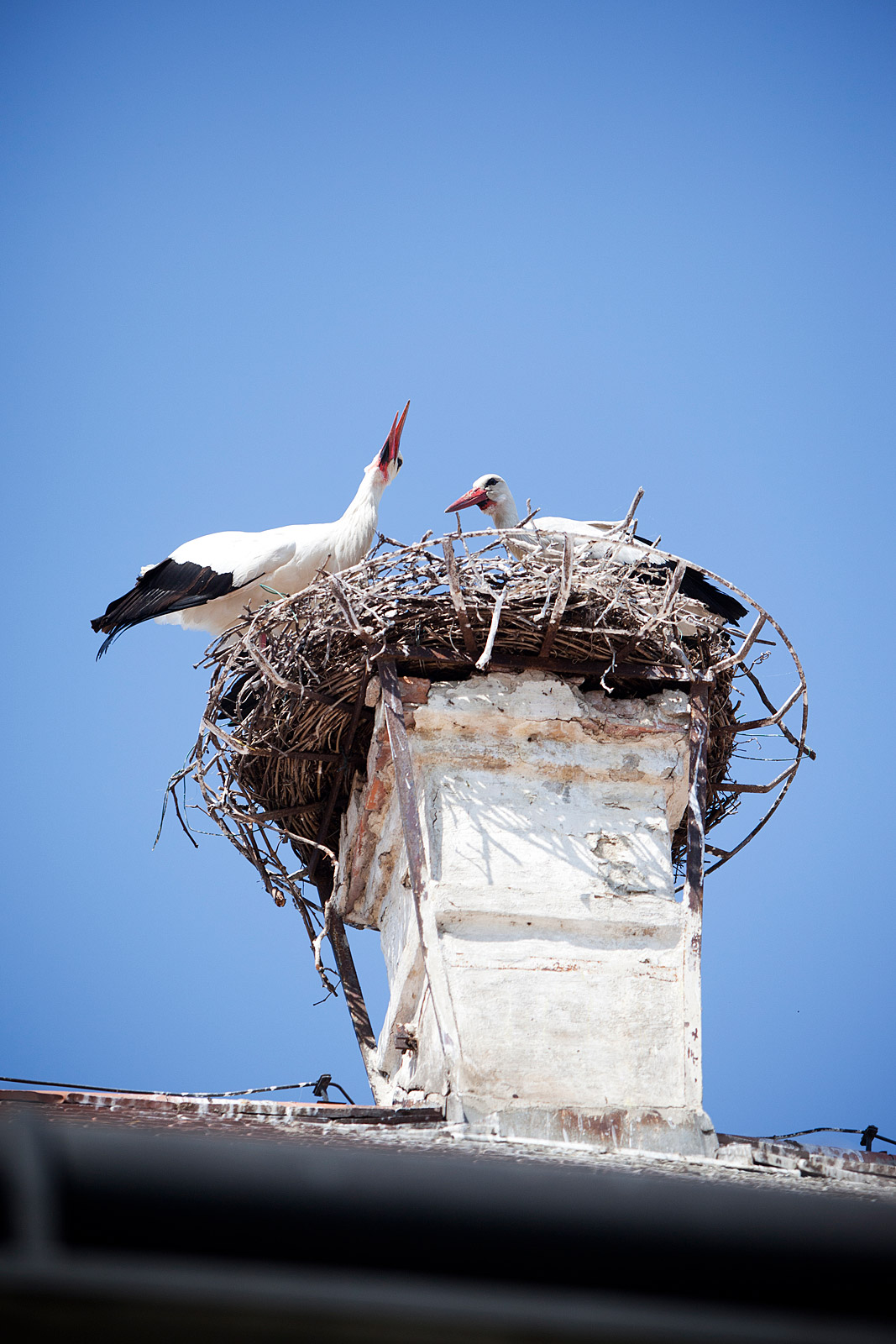 The concept is based on Rudolf Steiner’s Anthroposophy, a spiritual, holistic philosophy. “Our soil is our most important resource and we must not pull the rug out from under our feet,” says Eduard Tscheppe. And Stephanie adds, “We cultivate land, and we want to do it with great respect while taking responsibility for the next generation.” Going for the biodynamic approach was a “logical step” for Stephanie and her husband; neither of them would have wanted to do it any other way. They are now certified by Demeter, an organisation certifying foods and other products meeting biodynamic standards, and members of “Renaissance des Appellations”, an exclusive group of vintners around Demeter winegrower Nicolas Joly who once asked provocatively, “Do you want to be a winemaker or an assistant to nature?” There are now 170 members worldwide; you can’t join unless you have been invited.

Personality is more than the sum of characteristics

What does it mean to be a nature assistant? Eduard describes it like this, “We want to make use of the power of nature instead of forcing it into a certain direction. At the end of the day we consciously let go of our own expectations, we just go along with nature and marvel at the results.” The results are real characters: Their names are Theodora, Winifred, Timotheus or Joschuari, and seeing the bottle labels with their names and faces means remembering them. They really make the wines of Gut Oggau unique. The design was awarded a Golden Lion in Cannes in 2009, and in 2011 the couple brought its wine family to the Museum of Modern Art in San Francisco. Unique, however, is not supposed to mean different or extravagant in their book, it’s more about expressing the origin and soil of a wine. “There’s hardly any other plant that puts its roots as deep into the ground as vine: Wine roots grow up to 30 metres deep while at the same time the branches have such an incredible drive to grow upwards, towards the sun. Sometimes this almost tears the plant apart, but it also creates such an incredible energy – the energy that we strive to bottle, purely and genuinely. That brings this personality to our wines. It’s not something we create, it’s just there, stemming from all these natural influences,” explains Eduard very beautifully. And just as a person’s character cannot simply be broken down into specific traits, wine can not be described by dissecting aroma, flavour, alcohol, acids and sugar. “It’s rather about: How does this wine feel? How do I feel after drinking it? Does it raise me up or put me down?” Soul is nothing tangible, neither in wines nor in people. Winegrowing therefore requires sensitivity, feeling, listening, also for determining when it’s ready, just like with children where one day you have to decide whether they are ready to move out. Talking of children: If you believe in biodynamic, holistic agriculture, this will also affect other parts of your life. “This way of thinking and looking at things extends to every aspect of your life, to how you raise your children, how and what you buy, everything,” says Stephanie. 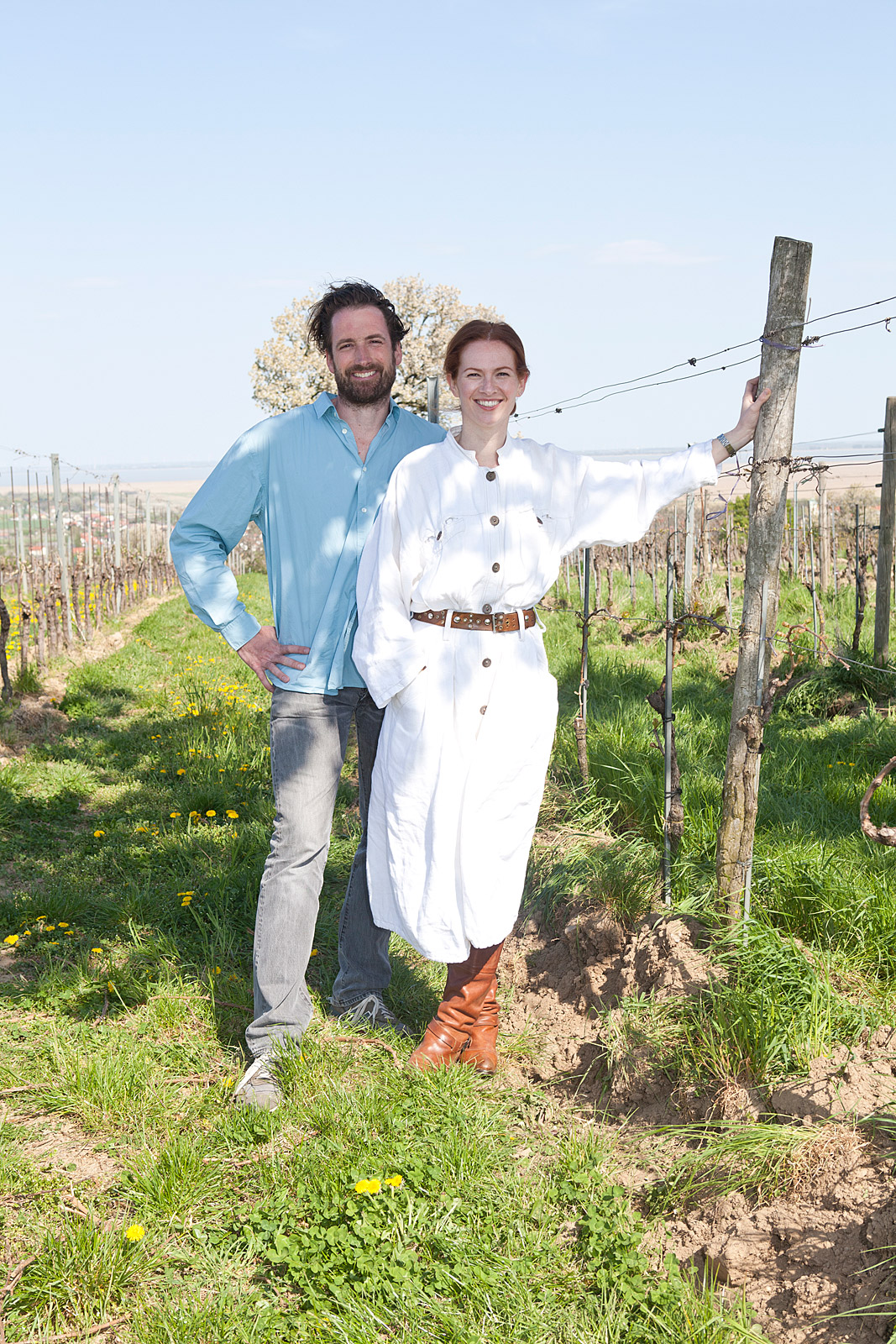 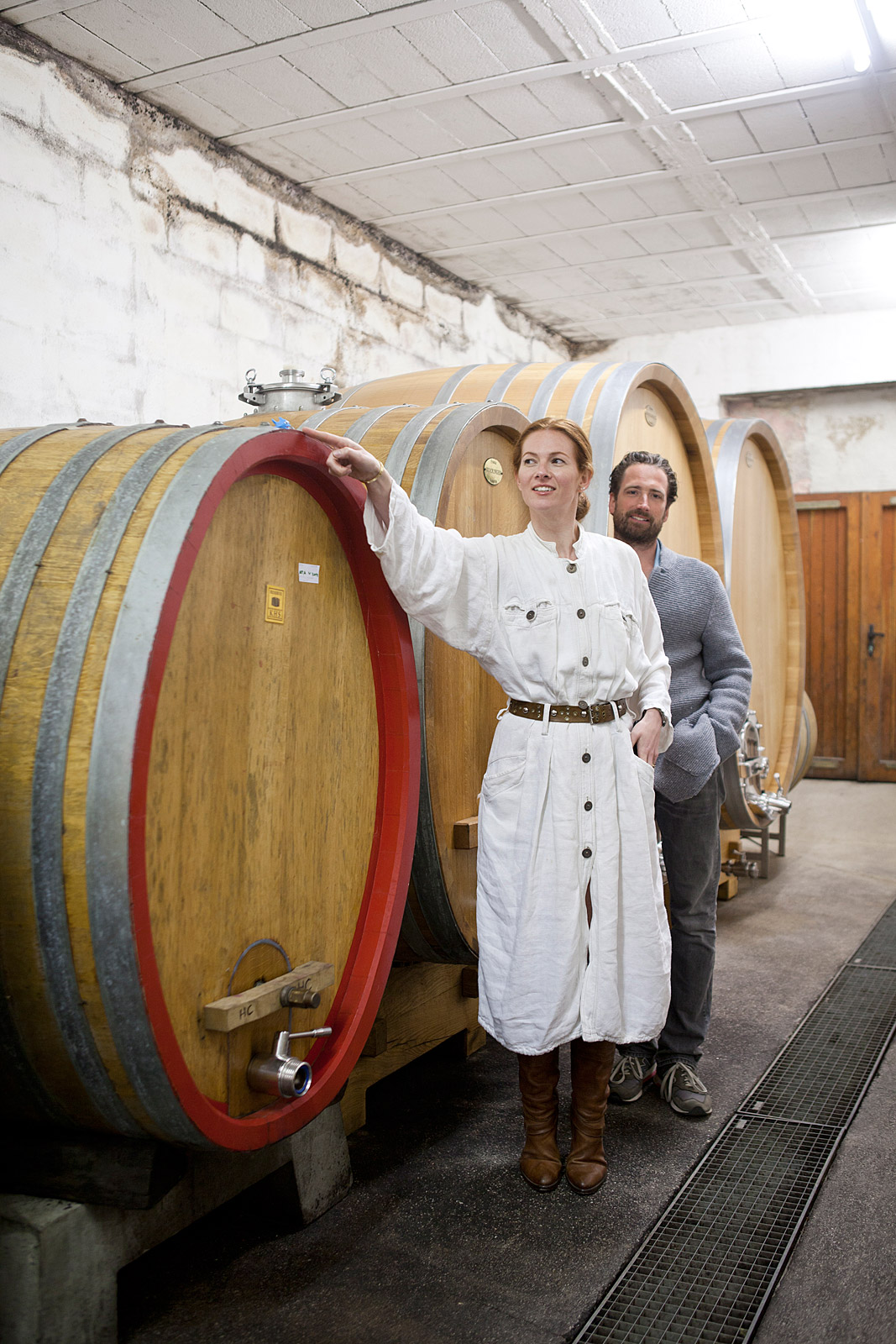 The Austrian pavilion at this year’s Expo is called “breathe.austria”. It is a forest that produces oxygen for 1,800 people – per hour. This way, visitors can experience the particularly good Austrian air. The reason why Stephanie and Eduard chose the land of her native Burgenland for growing their vines is not only because it is her home and her parents run a world-famous restaurant, the Taubenkobel, nearby. It is also the land, the soil that’s just made for biodynamic cultivation. It’s a vast domain; it not only allows you to breathe deeply, it even calls for it. Stephanie’s favourite place is the Hölzlstein between the villages Oggau and Schützen. “It’s a formation of rocks, a power place where the Celts came for rituals a long time ago. It’s very beautiful, a place to breathe and enjoy the view,” says Stephanie. Some of her vineyards are just below this historic site.

Visions from the past

The land here is ancient. So is biodynamic cultivation, yet it has come into vogue again only recently. What Stephanie and Eduard do is in accordance with the zeitgeist. But then again, it’s not. It’s not about being trendy, they say. Increasing awareness for the value of our planet and the scarcity of its resources is simply important and the right thing to do. According to Stephanie and Eduard, there is no future for standardised, industrial winegrowing, and the holistic, biodynamic approach isn’t even visionary anymore they say, “Because if you take a critical look it’s about the last chance we’ve got.” Very clear. “I would love if we would just talk about wines as such and no longer about the way they were produced,” says Stephanie about her vision for the future, a world where it goes without saying that all things are cultivated in harmony with nature, with respect for our planet.

So how would I rephrase my first sentence after learning about the couple’s philosophy and hearing Stephanie’s words? Maybe it would go like this: Wine decides to grow on land that is cultivated by Stephanie Tscheppe-Eselböck and her husband Eduard Tscheppe. Good wine with a personality you can taste. 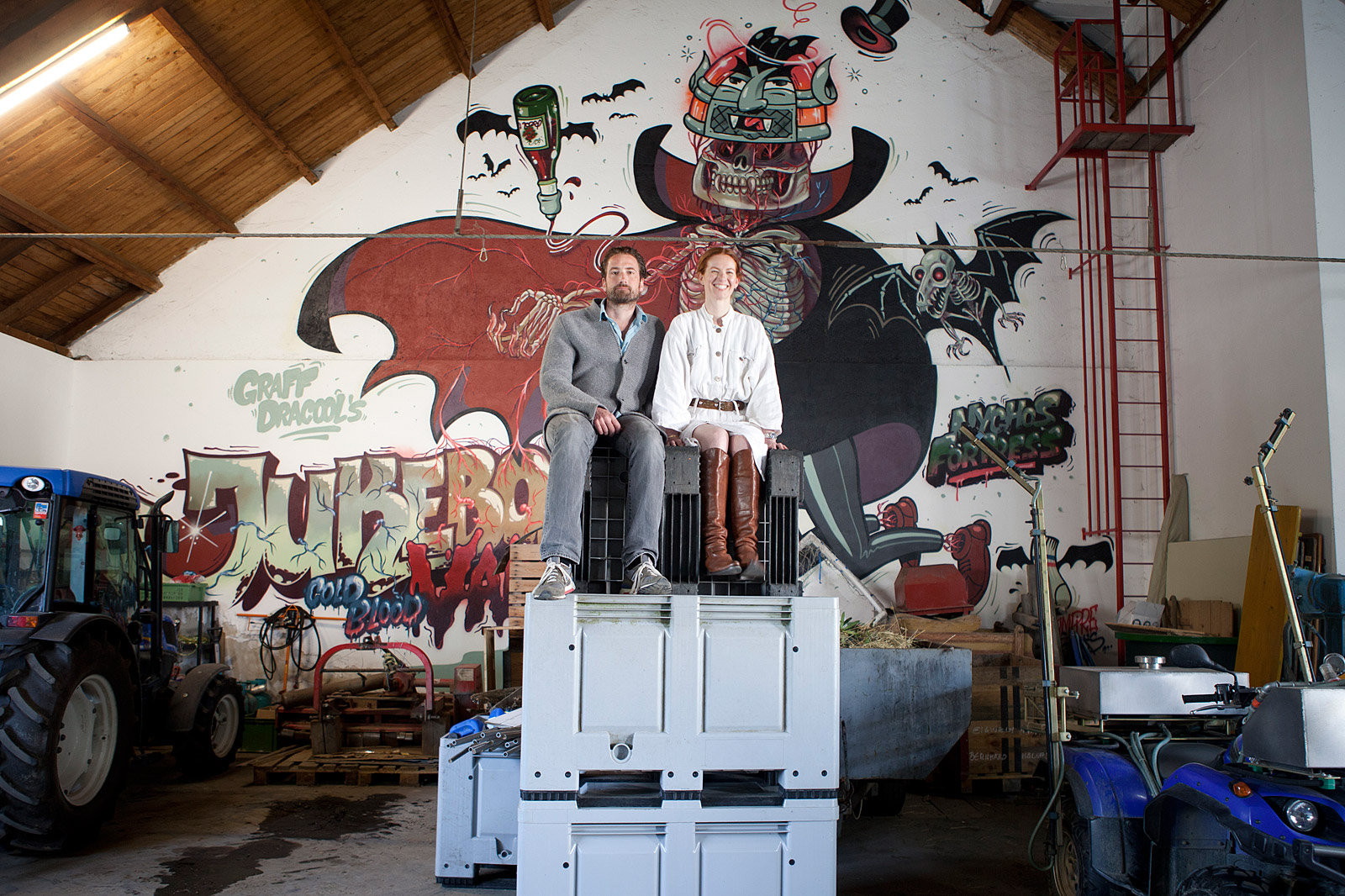