Living in a straw house

Living in a straw house

Technology, innovation, culture, tradition and creativity:
All these expo topics are essential also to the work of Georg Bechter, an architect from Austria’s westernmost state of Vorarlberg, and so is wood as a material for construction. They all are combined in Bechter’s search for exceptional solutions. His own home is a former stable, and for a client he designed a house of straw. Here he explains why people in Vorarlberg place so much importance on housing, what challenges he sees in the future of housing construction and why sustainability is not solely about insulation.

Every year, about 30,000 architectural tourists flock to Vorarlberg, German newspaper Süddeutsche Zeitung states that just mentioning “these three syllables makes German architects beam“, and already in 2000, London-based Wallpaper* Magazine found the small Austrian state to be “the most progressive part of the planet when it comes to new architecture“. This is quite flattering for an architect from here?

Bechter: In our professional world we obsess over this a lot less than people from outside the business, where you can sure find a lot of backslappers. Still I think all the buzz is justified. We provide standards, especially for detached houses, that are almost unrivalled in both quality and regional concentration. Walk through any of our villages and you will hardly find an architectural eyesore. But this is also because of the craftsmanship around here and the things that locals care about.

Do they particularly care about their houses?

Well, look at the old houses in the Bregenzerwald (one of Vorarlberg’s main regions), the traditional “Wälderhaus“: Those people were poor, some had hardly any clothes, but they built huge homes with high housing standards. A house has always been of value around here. I lived in Stuttgart, Germany a while ago, and there they talk about their cars. Some live in horrible houses, but when you open the garage…wow! For us that’s rather odd because here people have – and always had – a strong awareness for craftsmanship and architecture. It’s just something that’s culturally ingrained.

Wood architecture has played a major role in Vorarlberg for a long time already. Today it has become increasingly important also on a more international level. Is timber the future of constructing?

Well, here this is mostly due to the fact that wood is a commodity that literally grows right in front of your doorstep and you grow up knowing what wood can do. After all, we are a species influenced by our surroundings. On a wider scale, wood constructing has long been on a downward spiral: You remember those old houses where every step taken upstairs could be heard downstairs? Nobody wanted that anymore. A new architecture and new methods of construction, however, changed this, and today there’s almost no way around wood – at least if you care about ecology. And more and more people do

Speaking of ecology: In 2014, you built a house in Vorarlberg with load-bearing walls consisting of bales of straw, clay and lime – all completely bio-degradable materials. But seriously, walls of straw? Sounds pretty unstable to me!

The walls are 1.2m (about 47 inches) thick and built from quite tightly pressed bales of straw stacked on top of each other. And yes, the construction will subside by another 15 to 20 centimetres (six to eight inches), but usually within the first three to six weeks. Then it remains stable and building can continue. The bales are then plastered with clay on the inside and lime on the outside. 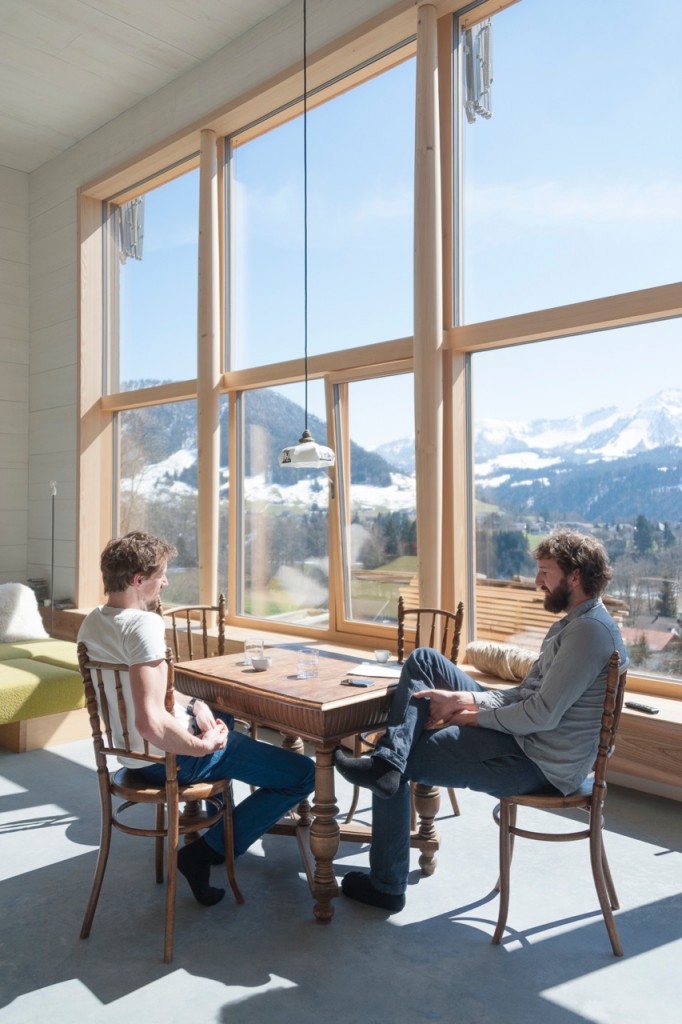 Timber houses are built by carpenters. But who builds straw houses?

Well, you look for people who have fun with something like that. Even the price offers we received differed by up to 100 percent, simply because some based their calculations on everything that could possibly go wrong while others just said: This sounds exciting, I’m intrigued, I want to do this.

And what did your clients think about this idea?

They were looking for something very environmentally friendly, but their budget did not allow for the traditional ways of construction under this criterion; quality simply has its price. But then I told them about a straw house that a Swiss architect had built about ten years earlier and said: If the house still exists, go and look at it, and if you are feeling really freaky, we could do that. They went and did just that and totally loved it. These ecological materials create an incredible aura and indoor climate, making you feel immediately comfortable. When you think about how easily we can create such an atmosphere it’s just amazing. When I was younger I have often railed against artificiality in building, but today I think, if someone wants to sit in a plastic house, let them do it.

But is it not also part of an architect’s job to strive for sustainability?

Yes, it is, but ecology is only one part of that. Eco-friendliness is something everyone understands, a must-have, something I take for granted and don’t put up for discussion anymore. Sustainability, however, comprises more than a material’s insulation capacity, it should just as much be about its value added chain: What can I buy locally instead of from low-cost suppliers? And last, but not least, there is a social aspect to sustainability in architecture: We create living spaces and landscapes. You have to have a feel for that, because what you do has the potential to affect the next 50 to 100 years of everyone and everything around it.

But it is hard to predict whether a building will still meet the demands of its inhabitants 50 years from now.

Of course there’s some guessing in this projection, and how correct it was remains to be seen. But I am convinced – and history shows this – that a reasoned solution will stand the test of time. A space that has been planned well today will still be good to live in some decades from now. If a building has outlived several generations, that’s real sustainability, and everything else is just peanuts. In this regard we have just about started a real discussion, especially when it comes to home building.

What do you mean by that?

In many housing, blocks every single flat has the same floor plan. I think we should look for more individual solutions. After all, not everyone has the same needs. But there is still not enough courage for such an approach. Many non-federal developers think they won’t be able to immediately find tenants for such objects. Yes, maybe it will take six months longer to find a tenant, but maybe you will then have him there happily for the next 20 to 30 years – instead of new tenants every four or five years, refurbishing expenses included.

When looking at others of your projects it’s clear to see that you are rarely after ordinary solutions. Your own home is a former stable and actually just one room. How do you approach new projects?

I want to get to know the protagonists involved, their daily routines if possible. What do they like? What is important to them? What are their habits? and so on. It’s alright if someone comes here and tells me he wants a big room, but I want to understand why he would want that. Maybe he doesn’t really want a big room but rather the qualities he attributes to big rooms: this could be a sense of freedom or a nice view. Moreover you have to consider other factors such as the plot or the surroundings. All of this information I throw into a mill and grind it until the right setting emerges. And if I come to find that an unusual idea meets specific requirements better, why should I go for a standardized solution?