Ideas with a big heart

Ideas with a big heart

At the beginning of each project there is a good idea – and they rarely come as a stroke of (one single) genius. Definitely not when it comes to their implementation. This is something the core team around Breathe Austria, consisting of Klaus K. Loenhart, Bernhard König, Lisa Maria Enzenhofer, Karlheinz Boiger, Andreas Goritschnig, Markus Jeschaunig und Anna Resch know all too well.
It was only after their ideas merged into a tangible concept that the real challenges started to materialize. And those included: moving 2550m3 of soil, 180m2 of moss, 350 forest trees, 240 hours of research in the woods, 58 trips to Milan, 87 nights spent working, 14,000 e-mails (per person), 85 kg of apples, 70kg of carrots; perseverance, conviction, and a happy coincidence here and there.
Lisa Enzenhofer and Bernhard König explain why it also takes a big heart to turn a good idea into a reality. 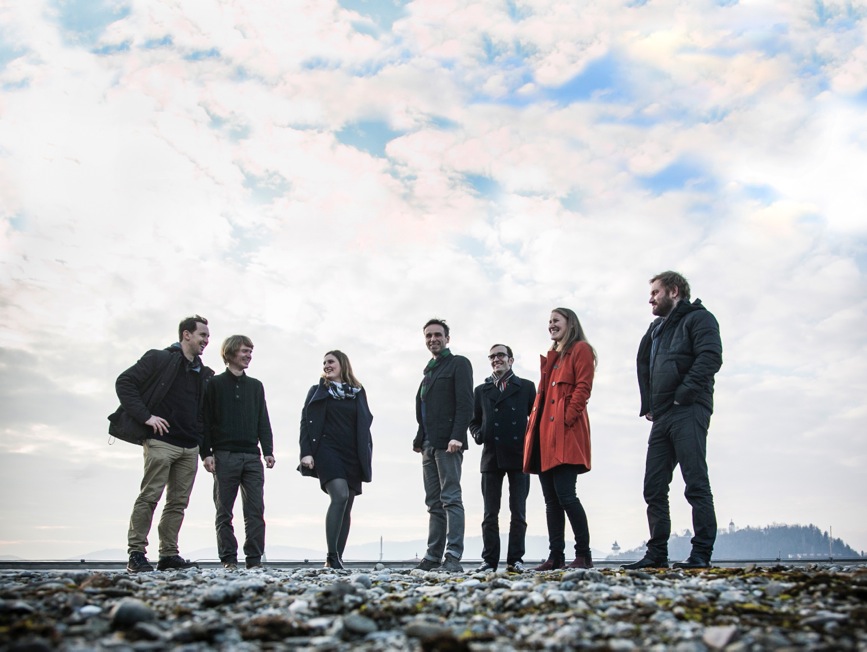 How did you become a team?

LE/BK: We all know each other from the University of Technology in Graz where most of us were and are still part of the Institute for Architecture and Landscape. The idea for the project came up spontaneously during a lunch break in the summer of 2013 which grabbed us that much that we discussed in a bar until late at night. And all the questions around it: what a world fair is and what Austria’s contribution could look like. 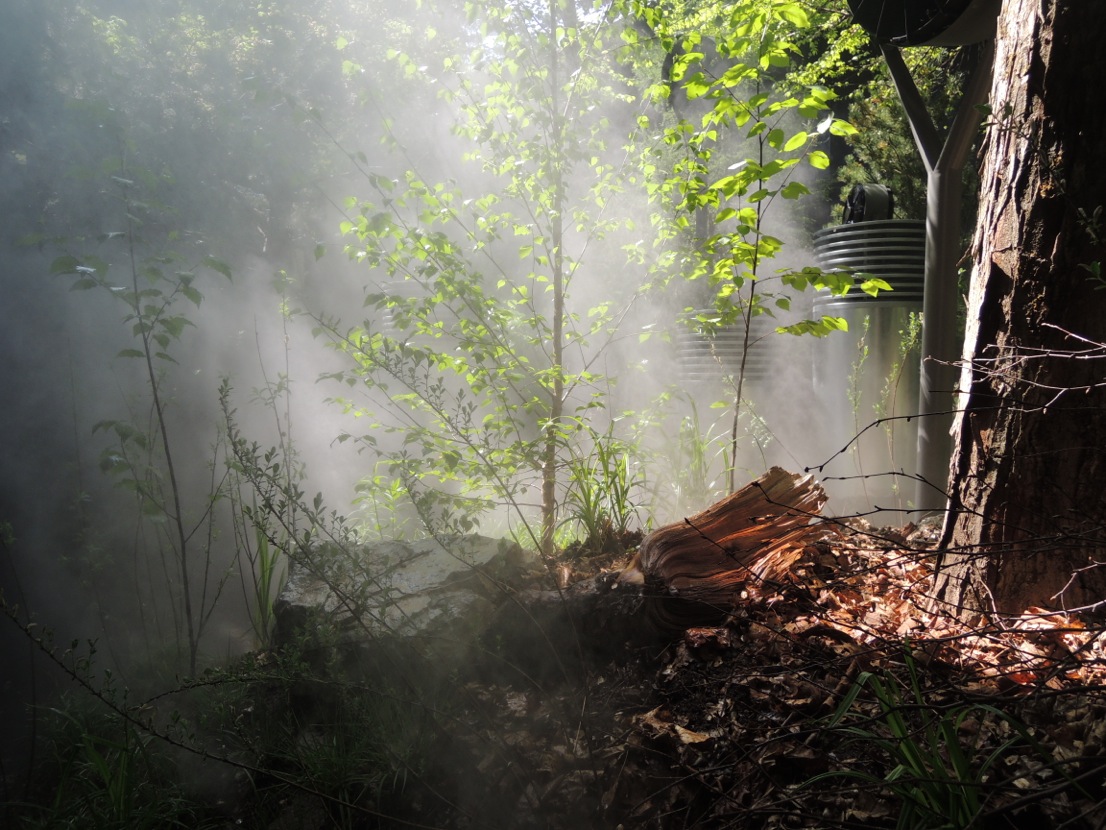 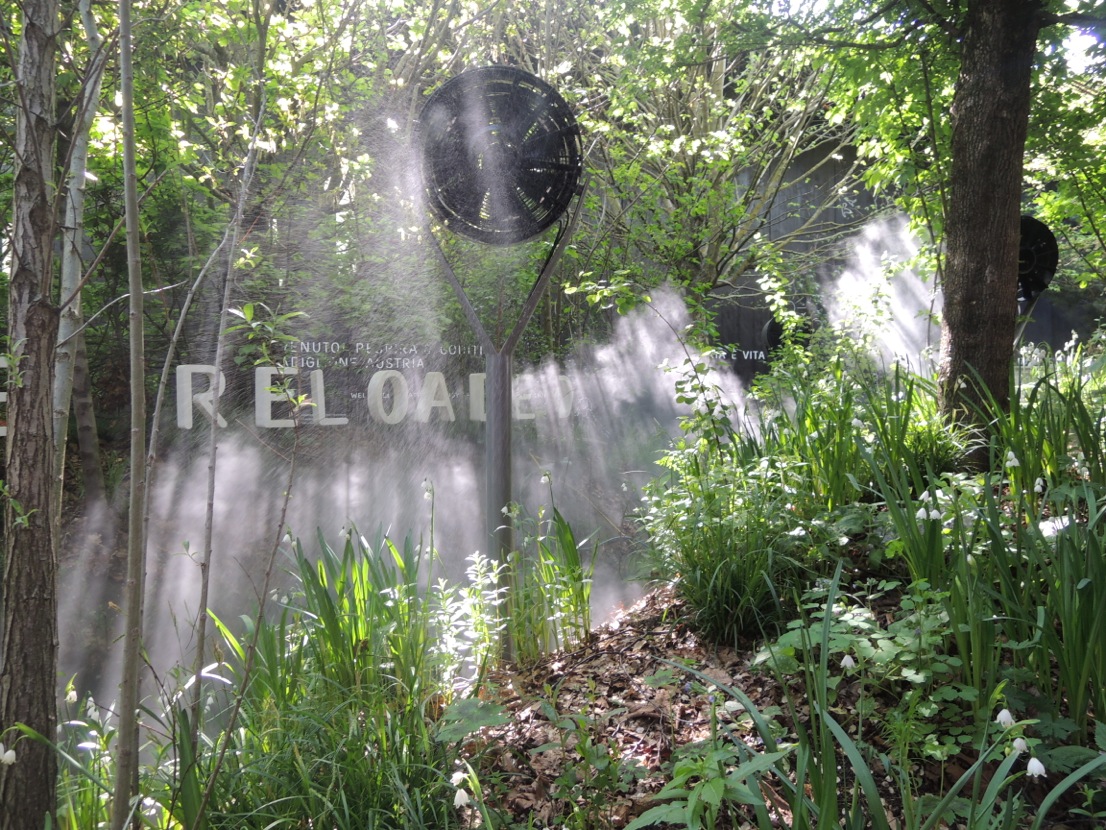 And how did you finally come up with the idea of building a forest?

LE: It was the result of many small moments… We wanted to make a clear statement with something that is related to biosphere, something that’s interacting with the world around it, reaching beyond the scope of Expo. And then we read this quote by author Tor Norretranders: When you take a breath, you touch a part of the planet with the inside of your body. All this and our passion for ecology and the forest led us to air, the thing that is the most vital thing to us humans. And then it became clear: we need to build a forest!
Another important inspiration came from Bernhard. He told us how he came to Austria for the first time after travelling from Eastern Germany with his parents…

BK: My first interaction with Austria was literally breathing its fresh, clean air. It was the beginning of the 1990s and we had been in heavy traffic all day long. Then, finally, we arrived in Austria, and my father got out of the car, took a deep breath and just shouted with joy. We all tore open the doors and jumped out of the car… So for me, air is at the core of Austria’s identity, and that’s also reflected in our pavilion.

Your team grew rapidly after the concept was born. Really amazing people like Bernhard Scharf (University of Natural Resources and Life Sciences Vienna), Wolfgang Kessling (Transsolar), Sam Auinger (Auditive Design) to Alfred Janousek (Raintime) have contributed with their expertise to the realisation of the project. What were the biggest challenges and what was most fun in the process?

BK: The beautiful thing about this project is that the collaboration with our network of experts made it more straight and clear. We had worked with most of the people on previous projects and so we knew from the very beginning that our idea was viable. We couldn’t have realised it in such a short time without them. It really took all these professionals and all the core team’s passion for the project, because the scope of this project required so much more in communication and negotiating skills than anything we had done before.

Very soon we all realised that the usual workflows didn’t work for us anymore. Instead we took a more simultaneous, interdisciplinary approach, even on the construction site. In the process, our network grew exponentially. Everyone needed additional support in crucial situations. There were so many experts involved, and all of them had to interact and cooperate…it was a very complex setup. 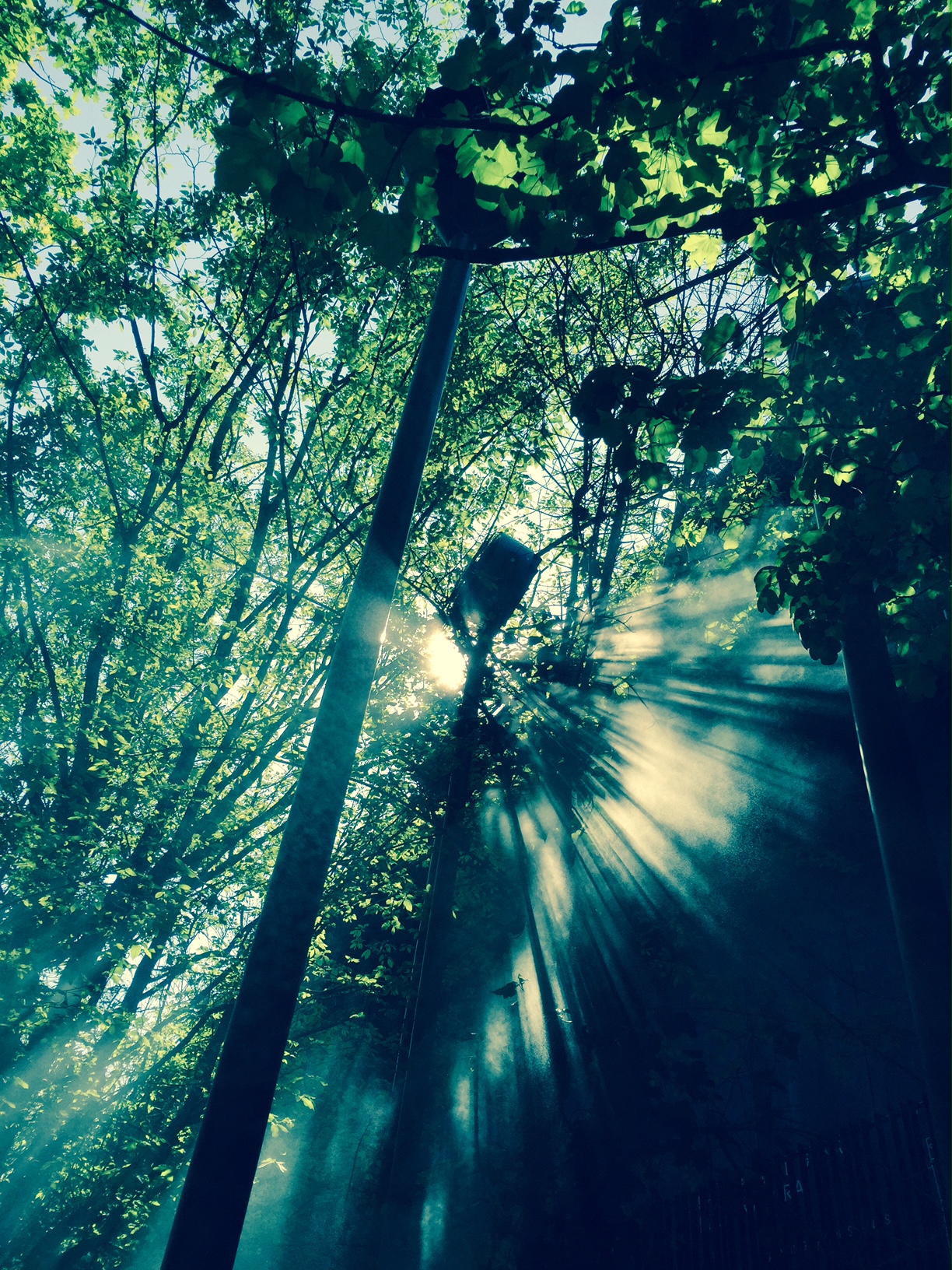 What did you take away from this experience?

BK: BK: First of all, we learned so many substantial things. I was lucky enough to have worked on several complex projects in Germany before, so I knew early on what was ahead of us. The most fascinating situations for me where those aha moments when we realised that we had reached a new level yet still had such a long way to go. Times when you ask yourself: Should I keep my head down or hold it up high? It was particularly impressive to see the passion and capacity of a team like this. Such an endeavour requires a big team with a big heart.

What does breathing mean to you?

LE/BK: LE/BK: To breathe consciously. To become aware that all beings are connected with each other. When you share a room with someone, for example, you also share the air you breathe: You breathe in what the other person breathes out. It means to really become aware that we interact with the people, with our surroundings on this level. And to realise how much information is stored in air – from nutrients to pollutants. 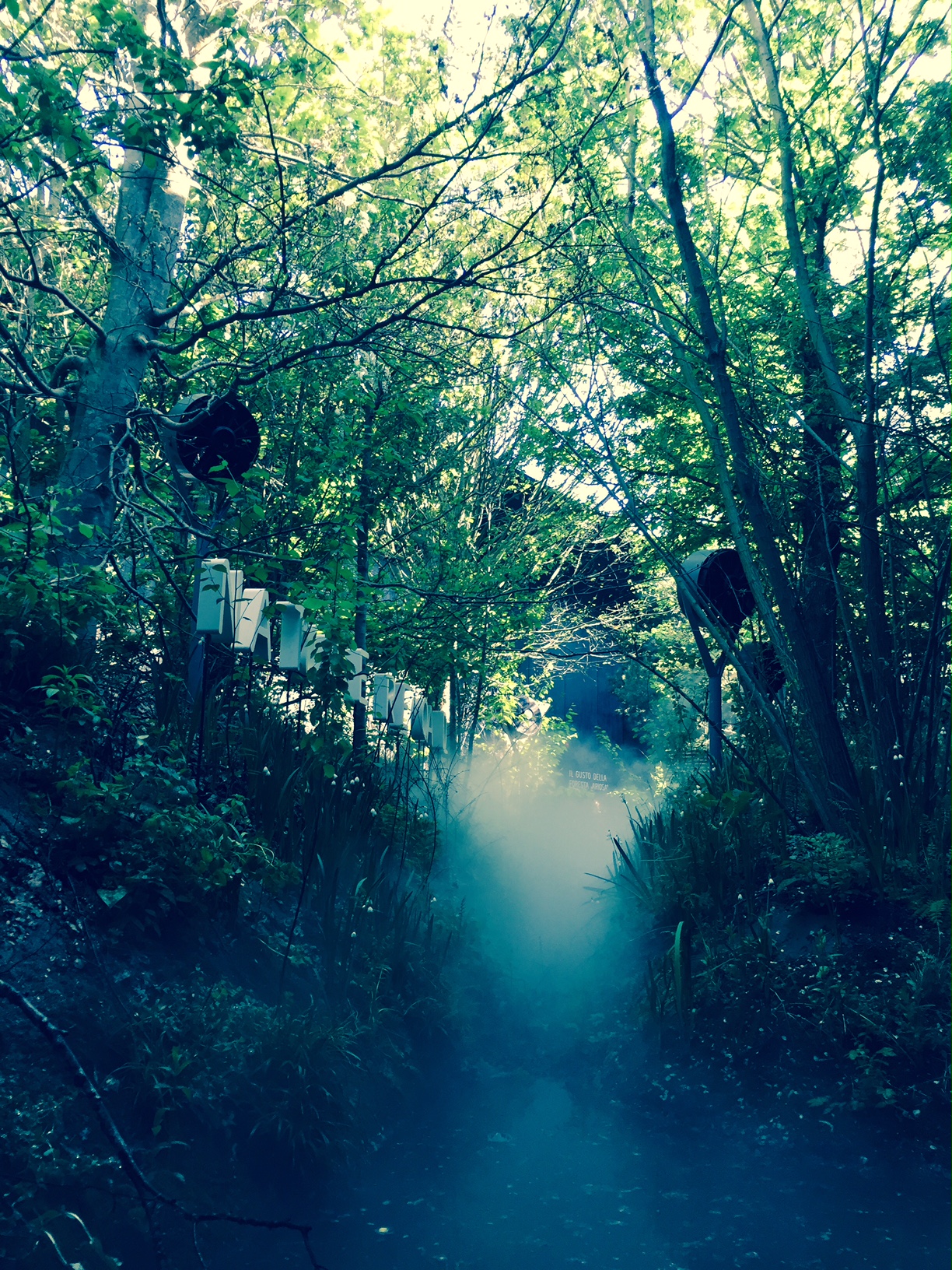 Your favourite place in Austria?

LE: The Gesäuse mountain range. We went there for research on forest ecotypes for the pavilion. The landscape is so raw and clear…and not crowded.

Any type of food or drink you couldn’t live without?

BK: Good air.
LE: Apples and carrots. We brought them from Graz to the construction site in Milan in our suitcases.

One good reason, besides the pavilion, for visiting the Expo in Milan?

LE: I think the Expo is a really important source of inspiration if you consider all the tasks we face for the future as a global community. During the construction of the pavilion we were able to witness the different approaches to the Expo’s theme “Feeding the World. Energy for Life.” This was really exciting. I think it’s this diversity, this interplay of nations that’s the real charm of a world exhibition.

Is there something particular you want to achieve with the pavilion? What do you want people to take with them?

LE/BK: An awareness of how important air is. What such a piece of forest can do. This is something you can really feel in the pavilion. When people come in they are filled with wonder, although it’s just a normal forest.
It’s quiet, pleasantly cool, it’s smells like a forest – this creates this atmosphere, a very emotional moment. We deliberately decided against illuminated displays to encourage a more conscious interaction with nature. We are less and less in touch with our sensory perception.

And how can we incorporate this awareness into our daily lives?

LE: A better understanding which makes us act more consciously on things like: What food do I buy? Where does my power supply come from? Whose politics do I support? How much do I use my car? Very basic things, that contribute a lot to protect our biosphere.